“You leave with love and some higher spirits,” 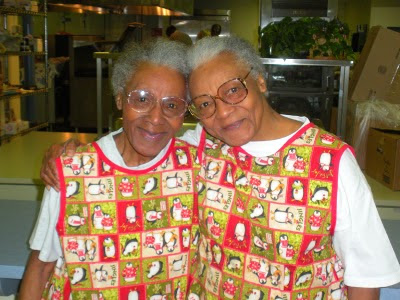 At 85-years-old, they admitted their legs have slowed a bit and they can no longer dance as much as they’d like to, but their heart, their love for each other, and their love for their community and the people they serve remains as strong as ever. Those who have visited them also claim they have the biggest, strongest, and warmest hugs. Their names are Helen Ashe and Ellen Turner, twin sisters and founders of the Love Kitchen.

The Love Kitchen, which was founded appropriately, on Feb. 14, 1986, serves free meals to as Helen Ashe has described as “the homeless, the hungry, the hopeless, the homebound, and the helpless.”

Fully staffed by volunteers, the Love Kitchen, in Knoxville, Tennessee, serves over 3,000 meals each week. On Wednesdays and Thursdays, the Love Kitchen serves a lunchtime meal where everyone is welcome. Hundreds often dine in, but the majority of meals, 1,500 on average (more than eighty percent of the meals prepared) are delivered to Knoxville residents who cannot physically leave their homes. Many of these people are elderly and suffer from debilitating illnesses or diseases. Emergency food bags filled with both canned and dry goods are also distributed.

The sisters understand the need out there, they know the hardships that many people encounter. They experienced those same hardships while growing up in Abbeville, South Carolina, during the 1930s and ’40s. They grew up in a house that had no lights or running water. But even during tough times, the sisters were taught to be selfless.

“My daddy taught us not to take the last piece of bread from the table; somebody may come by that’s hungry,” Ashe remembered.

Seeking to help others, the two enrolled in nursing school in the late ’50s, and after graduation, they began working at what is now the University of Tennessee Medical Center. There, they saw the stark realization of segregation, seeing many of their black patients struggle for food and transportation.

They decided they wanted to do something to help others, to spread a little of the love their Daddy taught them, so in 1986, in a church basement, they began serving meals. On that first day, they served 22 meals. The Love Kitchen has now served more than 1 million free meals to those in need.

A visitor to the Love Kitchen says, “You leave with love and some higher spirits when you talk to these two ladies here.”

Another grateful visitor adds, the food, which the sisters proudly boast are sweetened by the personal touch of each and every volunteer, feeds your body, and it also feeds your soul.

Living Life to the Fullest

Jump over the hurdles

Learn to be quiet enough