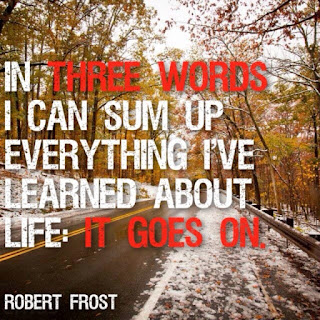 He had enough. He just got dumped by his high school sweetheart. He was poor, he had no job, his writings were unpublished, and he got expelled from college.

He made an unannounced visit to his ex, showed her two home-made copies of a book of poems he had been working on, he gave her one, then tore the other one to pieces as he walked away. Then without thinking, he just started walking, walking nowhere, he just didn’t care, he walked for 10 miles into the heart of darkness, right into a swamp. No one knows exactly what happened, but it is assumed the young man met his demons there.

“I have been one acquainted with the night.
I have walked out in rain—and back in rain.
I have outwalked the furthest city light.
I have looked down the saddest city lane….”

He was acquainted with the night, and he could have easily given up. He had just had his worst day, when everything seemed to go against him, until he felt like he could not hold on a minute longer, but he didn’t give up. He returned from the Dismal Swamp, and the rest is history. His name was Robert Frost. After he returned, his first poem got published, he and his sweetheart made up and married a year later. He became one of the most celebrated poets in history, winning the Pulitzer Prize four times.

Frost was 86 when he became the first poet to read in the program of a presidential inauguration, reading “The Gift Outright” at the invitation of newly-elected President John F. Kennedy. Frost died in Boston two years later, after living a full life. His epitaph quotes the last line from his poem, “The Lesson for Today (1942): “I had a lover’s quarrel with the world.”

And, he never gave up.

Today a new sun rises for me

Be what you feel!

Birds sing after a storm. Why shouldn’t we?

Or the day runs you

Appreciate what you have

Something to hold on to