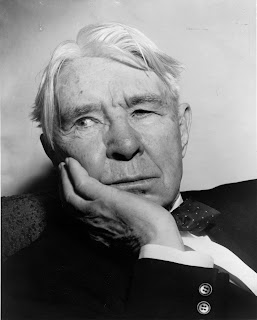 Carl Sandburg as a young boy didn’t have much, but he did have dreams. He was born in a simple 3-room cottage and worked various jobs, driving a milk wagon, working as a porter, and working as a brick layer and a farm laborer, and when there were no jobs available, he spent time as a hobo riding the rails and seeing the true America.
He spent many lonely nights just looking at the stars. He would later write about his experiences, championing the cause of “the Poor, millions of the Poor, patient and toiling; more patient than crags, tides, and stars; innumerable, patient as the darkness of night” and fighting for the American worker. He would become the poet of the American people, pleading their cause, celebrating their spirit. He hoped for the day when they would give a war, and no one would come.

“Give me hunger, pain and want,
Shut me out with shame and failure
From your doors of gold and fame,
Give me your shabbiest, weariest hunger!
But leave me a little love.”

He would later earn three Pulitzer Prizes, two for his poetry and another for his biography of another simple man who did extraordinary things, Abraham Lincoln.

She was told to get a day job…

Look into your heart

Confidence in your ability

Be what you feel