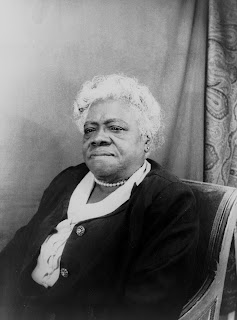 She was born in a log cabin in South Carolina, the 15th child, of former slaves. At age 5, she was already working in the fields. Sometimes she would accompany her mother to deliver “white people’s” wash. One day, she was allowed to go into the white children’s nursery, where she saw a book. She picked it up, fascinated by it. But, as she opened it, a white child quickly snatched the book from her, looking at her and telling her she didn’t know how to read. It was that moment she realized the only difference between white and colored folk was the ability to read and write.

From then on, Mary McLeod Bethune was inspired to learn and to share what she learned, eventually becoming a teacher. The first school she started she only had six students, it was near a dump, benches and tables were made from discarded crates, and students made ink for pens from elderberry juice and pencils from burned wood. Within a year, she was teaching more than 30 students, mostly girls. That little school would eventually become the Bethune-Cookman College, a coeducational junior college, and Bethune became president.

Bethune also was active in many organizations, one of which was the Florida chapter of the National Association of Colored Women. As chapter president, she would become well known for her work registering black voters, even receiving threats from the Ku Klux Klan.

She became so well known because of her work as an educator, educating both whites and blacks about the accomplishments and needs of black people that she would become a national adviser to President Franklin D. Roosevelt, known as “The First Lady of The Struggle” because of her commitment to give African Americans a better life.

When she finally passed away, she was recognized across the country. One newspaper suggested “the story of her life should be taught to every school child for generations to come” and The New York Times noted she was, “one of the most potent factors in the growth of interracial goodwill in America.”

In her own words before she died, she wrote:

50 ways to get unstuck

Someone Somewhere is thinking of you

I’m crazy about myself