“I am different, not less” 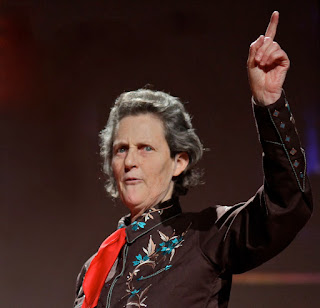 Diagnosed with autism at the age of 2, she was labeled as “brain damaged,” ridiculed and bullied through school,
yet she never gave up, saying, “I am different, not less.” She added, “I don’t want my thoughts to die with me, I want to have done something. I’m not interested in power, or piles of money. I want to leave something behind. I want to make a positive contribution – know that my life has meaning.”

In 2010, Temple Grandin was listed in the Time 100 list of the 100 most influential people in the world in the “Heroes” category. An autistic activist, she created the “hug box,”a device to calm autistic children.

An American doctor of animal science, professor at Colorado State University, bestselling author, and consultant to the livestock industry on animal behavior, she received an award in the “Visionary” category, from the People for the Ethical Treatment of Animals.

As an animal rights activist, she has talked widely about her first-hand experiences of the anxiety of feeling threatened by everything in her surroundings, and of being dismissed and feared, which motivates her work in humane treatment of livestock, saying, “Nature is cruel but we don’t have to be.”

You Can Be Whatever You Want To Be!

Make Your Mark on Life!

Which did me the most good?

Whatever you do, or dream you can, begin...

The dream that you wish