A Legend of the Strength of American Motherhood 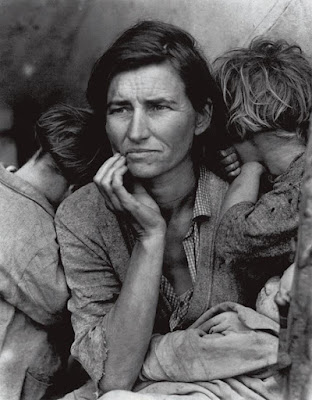 Migrant Mother For 40 years after the famous photo was taken and was seen around the world, no one even knew her name.

The famous photograph, according to historians, “has achieved near mythical status, symbolizing, if not defining, an entire era in United States history.”

Florence Owens Thompson (born Florence Leona Christie on September 1, 1903, in Indian Territory, present-day Oklahoma) was with her family when photographer Dorothea Lange stopped by to snap her iconic photo of “Migrant Mother.”

She would recall 40 years later how she would pick 400–500 pounds of cotton from first daylight until after it was too dark to work. She said, “I worked in hospitals. I tended bar. I cooked. I worked in the fields. I done a little bit of everything to make a living for my kids.”

Her daughter, in an interview, would say, her mother was a “very strong lady”, and “the backbone of our family,” adding, “We never had a lot, but she always made sure we had something. She didn’t eat sometimes, but she made sure us children ate. That’s one thing she did do.”

The day the photo was taken, Thompson and her family were at a pea-picker camp. More than a thousand migrant farmworkers had traveled there, only to find out that the crops had been destroyed by freezing rain, leaving them without work or pay. Thompson recalled that when she cooked food for her children that day, little children appeared from the pea pickers’ camp asking, “Can I have a bite?”

For years, she and her family were ashamed of that photograph, it was all over the place, but she said she never received anything from it, some of the original notes were inaccurate, and she was promised it would never be published.

But, because of that photo, even though Thompson and her family had already left the camp, more than 2.500 to 3,500 starving migrant workers in Nipomo, California received 20,000 pounds of food from the federal government after a newspaper published the photo.

Because of that photograph, the entire country was made aware of the plight of the poor, and, more, specifically, the migrant workers who toiled the fields to feed the country, yet had difficulty feeding their own families.

And, when Thompson was diagnosed with cancer and heart problems, because of that photograph, more than 2,000 letters and $35,000 in donations were received to help with medical expenses.

“For Mama and us, the photo had always been a bit of curse,” said her daughter. “After all those letters came in, I think it gave us a sense of pride.”

Thompson died September 16, 1983, leaving behind 10 children she nurtured, fed, and had taken care of through the worst of times, but in a way, she became a symbol for mothers everywhere.

Her gravestone read: “FLORENCE LEONA THOMPSON Migrant Mother – A Legend of the Strength of American Motherhood.”

Enjoy where you are!

A hundred reasons to cry

The things you look at

Dare to break through barriers

Some light reading that will move you or...

Develop an attitude of gratitude